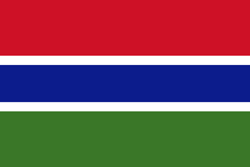 Working with local partner Africard, ZETES won the project on the strength of its experience of passport personalisation in other countries, such as Belgium and Ivory Coast. The company agreed the 15-year contract in February 2013, and the first new passports were issued in 2014.

This is a build and operate (BO) contract, where ZETES made the initial investment for establishing the registration, centralisation and personalisation. This model allowed the Gambian authorities to avoid any upfront implementation costs, whereas ZETES gets repaid over time, according to the number of e-passports produced.

Knowledge transfer to the local staff As with all BO contracts, ZETES set up a local company to run the project, and trained local people to work there. The aim is to transfer knowledge and create employment – helping ensure long-term success, and increasing the potential for similar projects in the region. Should a personalisation site need to be installed in another country in this region, the Gambian staff would be able to provide a quick support and training.

The new Gambian staff have a range of roles, including  performing the ABIS search, centralising the data into a unified register, and personalising the e-passport. They work alongside the government’s immigration department, which is responsible for managing the biometric registration of Gambian citizens, with support from ZETES.

Making applications easier Registration is carried out through ten enrolment booths, designed, manufactured and installed by ZETES to capture the biometric data and electronic signatures of passport applicants. Six of these booths are in the main site in Banjul, with additional units at the Gambian embassies in Brussels, London, Madrid and Washington DC. These enable Gambians living abroad to apply for an e-passport without having to return to their home country.

Also, for those in Gambia who can’t get to the centre in Banjul, there are two mobile enrolment units available. These are brought into people’s homes – perhaps if they are disabled or elderly – to ensure they can still have the e-passport they need.

Wherever the data is collected, it is centralized into a unified database on which an ABIS - Automatic Biometric Information System - search is performed, comparing the biometric information of any new applicant against all those already stored in the register as well as against the data previously registered for a same applicant.

Authenticating travellers with their irides In order to ensure an additional layer of security, besides the fingerprints, the biometric information of the applicants’ irides is also being registered. This allows for a double check in case fingerprints are missing, making the Gambian e-passport even more secure against forgery and identity theft. Zetes achieved a world’s first by storing these data directly on the RFID tag of the passport according to international ICAO standards.

Safe payments ZETES has built in even more security by working with African banking group Ecobank to develop a streamlined payment method for e-passport applications. Instead of bringing cash to the registration centre, applicants buy a voucher from the bank, and use this to pay for their e-passport.

Speeding up border crossings Managing the whole personalisation and authentication process, ZETES developed the final stage: the e-gates at Banjul airport that perform automated identity checks , capturing biometric information and comparing it with what’s encoded into the e-passport’s microchip. This technology saves time and reduces queues at border control for Gambian nationals.

With the Belgian government looking for a new supplier to personalise its electronic passports, high security, independent distribution and continual improvement were top of the…

Brussels (Belgium) - August 19th 2013 - Within the framework of a call for tender process, the Federal Public Service (FPS) for Foreign Affairs entrusts Zetes with the…